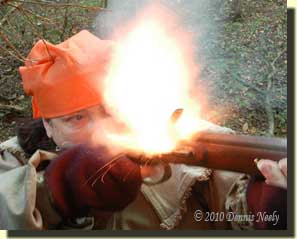 No life experience matches firing a flintlock. The “snap” of a sharp, English flint striking tempered steel, the cascading yellow sparks, the small “forest fire” that erupts when the priming ignites, the main charge’s pushback as the death sphere accelerates down the bore, the BOOM!, the roiling smoke and the joyous, sulfurous stench of spent black powder leave a lasting impression. Although it takes a bit to describe, the whole ignition sequence of “Old Turkey Feathers,” my Northwest trade gun, takes only 30 milliseconds. A flintlock is not “slow,” as some modern inline salesmen would have a person believe.

In my early traditional hunting essays, I struggled as I tried to condense such a life-changing experience into a word or two; “roared,” “bellowed” or “thundered” proved disappointing and inadequate. Perusing through field notes for inspiration for an upcoming article, I ran across “kla-whoosh” used to describe a wayward shot. The passing notation stuck.

During the second year of the Woods-N-Water News feature series, a family friend stopped me in the grocery store one evening. Sherry wanted to share how much enjoyment and pleasure she received from reading the traditional hunting stories. She went on to say that she was a non-hunter and avoided reading her husband’s hunting magazines, because reading about the kill bothered her. Because they knew me, her husband insisted she read a story or two. Sherry noted how she learned to stop reading when the “Kla-whoosh-BOOM!” appeared near the end of the essay, “Anywhere else, I keep reading.” With one exception, this stylistic accident became a signature practice.

Please continue to enjoy your visit, be safe, and may God bless.