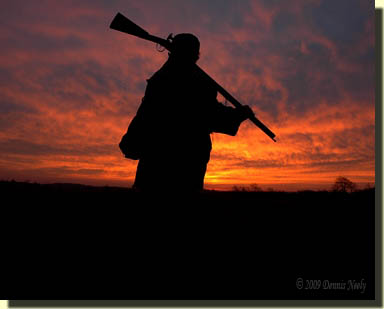 Most adventures begin with a few sentences gleaned from an old woodsman’s journal. Blend in the proper clothing and accoutrements of that time, a black powder arm typical of that era and the fair-chase pursuit of a wily tom turkey or an elusive whitetail buck and you’ve go the makings of a dandy traditional black powder hunt.

The usual focus is putting meat on the family dinner table; the fervent hope is stumbling upon a “pristine moment,” an elusive point in time when mind and body forge an unforgettable kinship with a long-dead hunter hero.

And scattered throughout the re-creations of 18th-century life at the headwaters of the River Raisin lurk the harrowing forest adventures that rival the originals, real exploits, begging to be recounted for inquisitive readers, without need of historical footnotes.

“Attentive to 18th Century Business” shares an encounter with a green tree frog and the intense anticipation as leaves rustle behind the woodsman on a spring wild turkey hunt. A resulting lesson in the wilderness classroom adds clearing land to a trading post hunter’s understanding of life in the Old Northwest Territory.

“Fooling ‘Old Lady Gray'” is the 2016 Michigan Outdoor Writers Association Cliff Ketcham Award winner in the newsprint category. This feature story begins with a tom turkey gobbling on the far ridge. The tale marks a dividing line between the 18th and 21st century and the role played in the drama by a smoke-gray wild turkey hen.

“In the Middle of the Trail” follows Lt. Lang, an experienced hunter for Captain Hopkins’ British Rangers quartered at Fort Detroit, as he traverses the backcountry in October of 1762. On an afternoon scout, a year before Pontiac’s Rebellion, Lt. Lang discovered “…a big hen stopped to my right…”

“The Rhythm of the Fray” relates a sudden attack on Fort Greenville in 1795. A returned native captive by the name of “Msko-waagosh,” the Red Fox, is pressed into service defending the log blockhouse. This harrowing tale touches on the living history side of traditional black powder hunting and building a character’s backstory.

The “Traditional Black Powder Hunting” feature series is published monthly in Woods-N-Water News: Michigan’s Premier Outdoor Publication. The essays are available, complete with supporting photographs, for print publication in non-competing markets, either as a stand-alone feature or a continuing series.