“Here, if you need a round ball, use one of mine,” Larry Horrigan said, plopping a one-inch-diameter lead ball in David Price Sr.’s outstretched hand.

Price scowled as he rolled the four-ounce projectile in his palm, then broke into a broad smile. “It’s a bit large for my rifle,” he said as he handed the gift back.

“Just trying to be friendly,” Horrigan said with an equally large smile as the bantering continued. 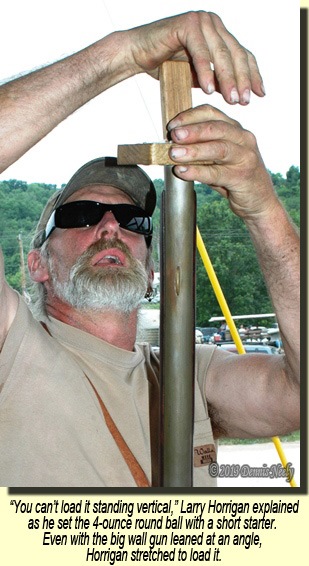 Ten minutes before two o’clock, Bob Rubbo addressed the growing crowd that followed Horrigan down the shooting line from the range officer’s cabin. “We’re getting ready to shoot the Gunmaker’s Match,” he said. “If you’ve made a gun and brought it with you, you can shoot in the match. It only costs two dollars to enter and you get one shot at the target. If you miss, it’ll cost you another dollar. Even if you don’t have the gun with you, you can shoot one of ours. We’re raising money for Gunmakers Hall.”

“Ya, you can use my gun, if you can pick it up,” Horrigan quipped, turning his back to the loading bench and offering the shiny lead ball to anyone who showed an interest.

“We just weighed the gun on the way here, at the offhand line. The range officer was dumbfounded. He’d never seen a wall gun before. It weighed twenty-four and a half pounds. I said, ‘There’s no weight limit on an offhand gun, right?’ He just shook his head. I offered, but he didn’t want to shoulder it,” Horrigan continued.

As folks signed up for the match, Horrigan paid his two dollars and told Bob Rubbo to put his name at the end of the list. “If I hit the target that ball will knock it over, and then no one else can shoot,” he warned.

The Gunmakers Match is a one-of-a-kind shooting event packed with good-natured kidding, a healthy dose of camaraderie and a dash of the unexpected. The match is always held the first Sunday afternoon at the National Muzzle Loading Rifle Association’s Spring National Shoot in Friendship, Indiana.

As the hour approached, gun builders from all over the campgrounds made a pilgrimage of sorts to the west end of the covered shooting line at the association’s Walter M. Cline Range. Each competitor toted a handcrafted muzzle loading arm of his or her own manufacture, and most rivaled the grace, beauty and craftsmanship of original arms on display in fine museums around the world.

The winner of the previous year’s match supplies two targets: the official, full-size target and a miniature version for the new winner’s mantel. Targets vary in size and shape, depending on the maker’s choice, and feature a traditional image such as an old Currier and Ives print, a painting or a photograph.

For the 2013 match, Gerry Rubbo molded an ornate edge on a rectangular walnut plaque and hand painted a German-influenced geometric design adorned with two tulips. Close to the upper right tulip, she added a small bumble bee to serve as the target’s “bulls-eye,” which, by custom, is never in the target’s center.

To add suspense, the shoot committee changes the orientation of the target and covers the face with one-inch grid paper to provide a reference for the spotter to call out the location of each craftsman’s shot—assuming he or she hits the target. The covered target is then attached to a portable backstop, and when the shooting line is closed between relays, the target and backstop are placed at an unspecified distance, somewhere between 100 and 200 yards, just to make the match a bit more interesting. 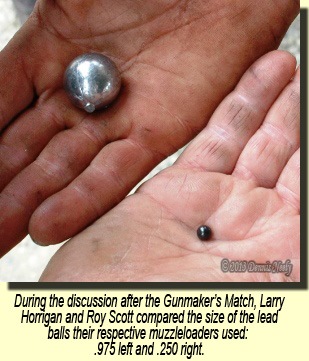 On that pleasant June afternoon, spectators and shooters alike were abuzz in anticipation of seeing Larry Horrigan fire the long and heavy wall gun. But as the first maker, decked out in bib overalls, a white tee shirt and a camo ball cap with his orange shooter’s badge attached, stepped to the line, the drama shifted to the contrast between the first and last muzzleloaders—Roy Scott’s .25-caliber flintlock and Larry Horrigan’s one-inch smoothbore.

After his shot, a faint trail of smoke drifted from the muzzle of Roy Scott’s Tennessee longrifle, as Bob Rubbo peered through the spotting scope. Several shooters said they heard the 23-grain lead sphere hit, and the spotter confirmed Scott’s marksmanship.

“This is a Southern Mountain rifle in the Bean (family) style,” Scott said when another competitor admired his rifle. “It has a 40-inch octagon barrel, 3/4-inch across the flats, made by Ed Rayl. It’s either the first or second .25-caliber barrel Ed made. It has a maple stock, very curly, from a local tree in Pennsylvania. It’s iron mounted with double set triggers and a banana-style patch box (long, thin and hinged in the middle) like the Tennessee Bean rifles had.

“This is the first time I’ve shot this match. I’m usually too busy on the bench gun line. I brought the rifle along to shoot in the .40-caliber and under bench matches. I had some time, so I thought I’d give it a try. I’ve shot it mostly at 25 yards and a couple times at 50 (yards). I had no idea how far the target was. It’s at a hundred yards and when I saw that I said, ‘Man, you are really stretching my little .25,’” Scott said.

“This wall gun was from about 1775,” Horrigan explained. “It was either Dutch or German; (the museum curators) are not sure. When I build a gun, I build ‘em right out of a book or from an original. They were also called “Amusette” or “rampart guns,” because they were fired from behind a fortified wall. The original had a hook welded to the barrel. They were running 300-grain charges, and you couldn’t hold it offhand so you hooked it over the wall. These were made for shooting rounds at 500 yards.

“I’m shooting a .975 round ball out of it with a lot less powder. I’m using regular cleaning patches to patch the ball, because they were the only ones I could find that were big enough. I copied the barrel, turned it on a lathe from 2-inch, drawn-over-mandrel, high pressure tubing. It’s 54 inches long, 1 3/4 inch at the breech, 1 1/4 inch at the waist and 1 3/8 inch at the muzzle.

“Dennis (Priddy) helped me make the breech plug. We started with 2-inch solid stock, milled the tang and turned the threads. I bought the castings for the lock online; I made sure I won that bid. The lock plate is over 8 inches long. I started assembling the lock and Dennis finished it, because I wanted to have the gun done for the club’s winter shoot.

“I cut the stock blank from a real nice piece of cherry. I was saving it for a fowler, but it was the only blank I had that was big enough. I bought the furniture (trigger guard, butt plate, rod thimbles, etc.) for the Dutch wall gun. It came out of Oklahoma, and they actually made it in three different styles. 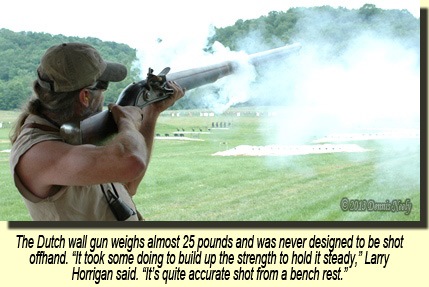 “You can’t load it standing vertical; it’s over six feet tall. I had to work out with weights to build up enough strength to hold it offhand. We shot it at 25 yards, but not at 100 yards so I wasn’t sure where to aim for this match. I’m not surprised I missed,” Horrigan added.

After the match, Scott and Horrigan compared the size of the projectiles. “The ball weighs 23 grains, and I get about 56 out of four trade gun balls,” Scott said.

A bystander was already punching the numbers in his cellphone’s calculator. “That’s about 76 .25-caliber balls from one round ball for the wall gun,” the fellow announced.

At the end of the match, when the paper was removed, Scott Ballentine’s shot was closest to the bumble bee. But in the spirit of the match, the kidding continued. Roy Scott’s shot was an inch or so farther from the bee. “I think I should have won,” Scott said, “I’m the only one who can prove for sure I hit the target. My ball’s still in the board!”