“What did you shoot?” Randy MacInnes asked with a wry smile on his face.

“None of your business,” David Maddox barked back, turning quick so his body blocked his long-time friend’s view of the five holes in his six-bull target.

“What did you shoot?” MacInnes pestered, laughing as he pushed back his cardinal-red baseball cap with “O. C. S. C. Shotgun Club” embroidered on the front, advertising the Oakland County Sportsman’s Club.

“Ya, Dave, show him your target,” a grinning Dick Thorn taunted as he tugged at his left earplug.

“Okay, I shot a clean ‘48.’ There, are you satisfied?” Maddox sniped in feigned disgust as MacInnes laughed louder. “I don’t see the humor in that,” Maddox added with a scowl.
The banter continued and even escalated a bit on the covered bench gun line at the 2014 Michigan State Muzzle Loading Association’s State Championship Shoot in early July, hosted by the Grand Valley Cap n Ballers™ at their home range in Hopkins, Michigan.

In the midst of the mild theatrics, Joe Valentin, his son and daughter-in-law walked up to the loading bench. Valentin, a fellow bench rifle shooter, said he was showing his guests around, but from the smile on his face and the twinkle in his eye, he knew he was injecting them into the jovial controversy that surrounded the “Popsicle Match.”

“So, who’s winning?” Valentin asked as he looked over Maddox’s target.

Any “State Championship” event elicits thoughts of a fierce, gut-wrenching, nail-biting competition, but that is not the norm with the black powder shooting sports. So there is no misunderstanding, the competition is stiff and the “state shoot,” as it is known, attracts the best shooters from across Michigan. There are titles, trophies and medals at stake, but the primary emphasis of the MSMLA is on family, camaraderie and having fun. 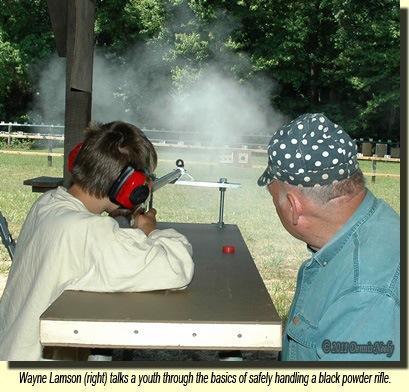 The five-day state shoot fosters a welcoming and relaxed atmosphere for sharing a common interest in the muzzleloading arms of our ancestors. To further the sport, the association provides a “beginners bench” and encourages newcomers of all ages to join in the black powder shooting experience. At the beginner’s bench, veteran competitors teach the proper care, handling and loading practices necessary to safely enjoy a muzzleloading rifle, shotgun or pistol. Plus they are always willing to field questions from bystanders.

The club features immaculate grounds, sufficient parking, a clean camping area, on-site food service and a clubhouse for educational seminars. The covered offhand and bench rest lines have loading space for each shooting position, and the grassy range has ample target boards for the 25, 50 and 100 yard matches. A separate range is devoted to the primitive events, and there is a rustic woodswalk area.

The event schedule includes over 75 individual matches and 23 aggregates, which combine the scores from two or more matches. There are matches for percussion and flintlock rifles, pistols and revolvers, military muskets, smooth-bored trade guns and bench guns, and there are separate divisions for men, women, seniors (60 and over) and juniors (15 and under).

The shooting roster includes offhand line matches, pistol and revolver competitions, buffalo or X-stick shooting, bench-rest matches, woodswalks, knife and tomahawk throwing and primitive events that require period costumes. The entire family can shoot for a $30 entry fee or single shooter registration is $20, which covers all matches. A Novice Aggregate is available for $10 per family or $5 per single shooter.

“This year we are adding a modern unlimited inline hunter aggregate,” David Maddox, the current MSMLA president, said recently. “It will be four targets for a combined score. This is a three-year trial match, so there won’t be individual matches or medals, just a percentage of the $5 entry fee paid out.

“We are trying to get new people involved, and we hope they will take an interest in the old-style muzzleloaders, too. We want people to come out to the range and see what we have to offer,” Maddox added.

“What we call the popsicle match is Match 17 on the program,” Randy MacInnes explained. “It’s the 50 yard flint-only bench rest, and it’s named in honor of David Maddox.

“Before the shoot, we try to set a date when everyone can get together. This year, Dave said he’d have his flint bench gun out on Friday. Dick said he didn’t care and I said Friday worked for me. The date always works out.

“The most important thing about the popsicle match is that we were trying to get a few more people to shoot the flint bench rest match, Match 17, so we came up with the idea of a popsicle match. It was just something goofy and fun. Everyone buys the winner a popsicle or ice cream bar, if they remember. If they don’t, we don’t go looking for them.

“We change the rules a little. The match is shot at 50 yards with a six-bull target. Normally the upper left target is for practice shots and you shoot once at each of the other five targets for score. We do that because with the accuracy of the bench guns it’s possible to put two balls in the same hole.

“But for the popsicle match, we don’t allow any practice shots. We assume each shooter has zeroed in the rifle on other targets before he or she shoots the match. It’s five shots, take it or leave it,” MacInnes explained.

“Ya, the official Match 17 allows practice shots,” Maddox chimed in, pointing at MacInnes and Thorn, “but these two masterminds decided it should be shot without any practice.” 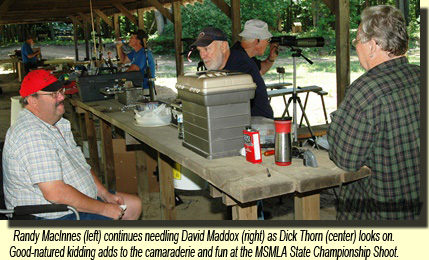 An hour after Maddox finished shooting his target, the banter continued. He removed the lock and started cleaning the heavy-barreled rifle’s bore. “This is a Ken Bresien .54 caliber flint bench gun,” Maddox said after a bystander asked about the gun. “We named it ‘TLO.’ It stands for ‘the last one’ Ken made. He’s out of New York state, and his bench guns are prized. Randy and I drove out to pick it up.

“It likes a .542 soft lead round ball with .020 Wayne Lamson Teflon coated pillow ticking and a healthy charge of FFg Goex black powder. Do you feel up to showing me how to clean it?” Maddox asked, looking over his bifocals at MacInnes who sat smiling in a camp chair.

“I’ve been watching, and you’re doing a fine job,” MacInnes said with a grin. “Kenny would be proud of you.” [Ken Bresien passed away August 23, 2014]

For more information about the MSMLA State Championship Shoot, contact David Maddox at 810-639-7479 or dmaddox07@centurytel.net. Spectators are always welcome, and there is no cost to come out and watch.

And black powder shotgun enthusiasts should mark their calendars for the MSMLA State Shotgun Championships scheduled for August 13th to 17th, 2015, hosted by the Grand Valley Cap n Ballers®, located at 3576 26th Street, Hopkins, Michigan. For more information on the MSMLA State Shotgun Championship, contact David McMurray at 269-370-0095 or Ron Fernwalt at 616-836-5760.