Not Quite According to Plan

Mental run-throughs never encounter a hitch. Problems never arise. To the contrary, success falls out of the sky—or a plump red cedar tree in this case. The plan sounded simple enough, well thought out with every contingency allowed for. The instructions were clear and straightforward; no need for a written list.

A few minutes before seven-thirty in the morning two black trash bags, heavy leather gloves, a six-foot aluminum stepladder, a pair of wood-handled pruning loppers and a rusty set of hand nippers vied for space in the Jeep’s backseat. For good measure, a beat-up pole trimmer stuck out from under the half-zippered rear flap of the CJ-7’s rag top.

Then the telephone rang with a commanding urgency. A few hectic phrases from a loving daughter will melt any father’s heart. The unexpected mission of mercy shoved that morning’s woodland excursion lower on the totem pole of personal priorities. Unfortunately, the plan didn’t account for the delay.

The idea of a paper-gray hornet’s nest suspended from the living room’s rustic-plank ceiling always appealed to me. One collected from the North-Forty added to the mystique aura. But Tami, my wife, expressed a bit of skepticism. She asked time and again if we would have hornets circling around the owl atop her Christmas tree.

Research proved that would not be the case as bald-faced hornets abandon the nest after the first hard freeze. The instructions I found for safely gathering a nest recommended hanging the hornet’s vacated dwelling in a cold building, like an unheated garage or pole barn, for several months before bringing it into the house. This suggestion is more for avoiding the smell of drying corpses than as a deterrent for resurrecting live ones. The knowledge did little to assuage my wife’s fears.

The Sunday evening before, Tami spotted the top-shaped prize half-hidden in the boughs of a bushy, red cedar tree. We took a stroll on the west side of the fen; the hornets’ abode hung at the swamp’s east edge. Through the compact binoculars we each gazed at the paper-gray nest, which looked head high from a distance. Despite her misgivings, Tami broached the possibility of needing a stepladder to reach it.

Another call, this one business related, pushed the clock close to high noon before the Jeep rumbled through the gate and along the North-Forty’s rutted two-track. The fall’s third snowy-white frost had long since melted and evaporated. As I bounced along, dust stuffed my nose and clung to my silver-rimmed glasses. The air smelled warm and dry, and in the back of my mind, a little voice wondered about the blazing afternoon sun.

With the rolled-up trash bags stuffed in one hip pocket and the nippers in the other, I grabbed the stepladder with my right hand and the wood-handled loppers with my left. The ladder’s legs rattled, snapped and clattered as I headed for the east side of the big swamp. I hustled across the utility company’s clear-cut right-of-way, then through the small stand of hardwoods that led down the hill to the swamp.

“Jay! Jay! Jay!” Blue jays screamed as purple raspberry switches clawed at faded denim jeans. Brilliant sunlight reflected off the ladder’s silvery surface, leaving white spots drifting in my eyes. Moccasin-clad feet scurried over the bare-peat deer trail that led to the little clump of cedar trees. I stopped short, maybe ten yards away. A cedar waxwing clenched the bough above the nest. I watched until the bird flew off.

Like a groom having second thoughts before he takes his place at the altar, I dropped the stepladder and pruning shears six or so feet shy of the cedar and paced back and forth, scrutinizing the nest. Tami was right; it was higher than it looked. With all the hard freezes and frigid nights, the inhabitants were gone, or so the instructions assured. The nest looked abandoned. As I stood and pondered, the sun warmed my back, and again that little voice wondered if waiting until the next morning wasn’t a better choice.

It was then that I remembered my earliest encounter with “white-faced” hornets, as my father always called them. I was six, and father took me with him to a dilapidated corncrib west of the dairy barn. LeRoy Ehnis managed the family farm and needed a bigger corn crib. The old crib was about the size of a Model-T garage with open-slat sides and weathered-grayed cedar shingles on a steep-pitched roof.

Dad met LeRoy shortly before noon. We hadn’t had lunch, yet; mother told him not to take too long. He said he needed to set corner stakes for the new building before calling Andy Sanders, one of the local excavating contractors. She smiled and said, “You boys be careful.”

I waited by the blue and white station wagon. Dad left the passenger door open so I could sit in the shade, but I wandered to the front of the car; I was supposed to be helping, wasn’t I? I don’t remember who, but one of them opened the door to the old corncrib and just inside was a huge hornet’s nest. It looked as big as the whole car; but I was six, and I’m sure it wasn’t.

They both started running. Father yelled for me to get in the car and close the door; his tone left little question that I should obey. In an instant, black-winged dots started bouncing off the windshield; neither LeRoy nor father was stung. A few days later, in a gentle drizzle, they burned the old corncrib down.

The aluminum stepladder snapped open. “The Jeep is uphill, a hundred yards,” I thought to myself as I made sure all four legs were grounded. “Father and LeRoy were close to the station wagon and barely made it. If there are hornets, you can’t outrun them…”

Looking up at the nest, I realized the instructions didn’t account for hornet nests in tight growing cedar boughs. “Place a bag over…in case hornets are present…tie off.” The nest was too entwined; the dense packed boughs prevented that step. The garbage bag was meant to restrain any lingering hornets. I pictured dad running from the corncrib, the door wide open, the massive nest just inside…

Backtracking into the oaks, I found a long barkless stick and nudged the nest’s branch. Nothing happened. I nudged again. Nothing. Muscles tensed, I climbed the stepladder; my eyes never left the gray cone’s ominous mouth. The hand shears snipped. Tiny sprigs tumbled in the breeze. Pencil-size branches were next. Following a revised plan, the main bough would be last.

A stiff gust whooshed through the cedar. In reaction, my left hand grasped the top step. For an instant I looked out into the big swamp; a turkey buzzard’s shadow raced across the yellowed canary grass. “Not good,” I remember thinking as I pulled the wood-handled loppers from the ladder’s shelf. 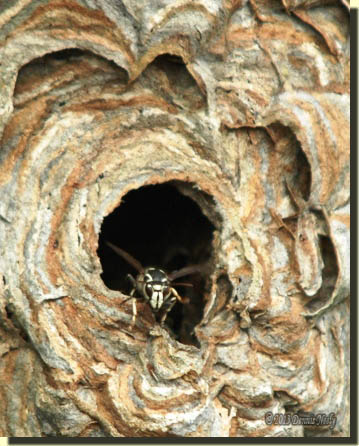 The lopper’s jaw hooked the main branch. I glanced down and saw a logy black hornet peering from the nest’s entrance. In a split second my heart comprehended; I retreated down the ladder and stepped away. The sentry held its ground. The concern with the afternoon’s warmth proved well founded.

A trip to the Jeep bought time to cogitate. The blue jays made great sport of my predicament. As I retrieved the pole trimmer, I worried about damaging the nest in a freefall to the ground. “If I’m careful, it might rest on the lower bough” I reasoned.  “But what of the hornet?”

When I returned to the tree I found the hornet turned about, facing into the nest. The trimmer’s jaw wiggled over the branch. The buzzard kited in lazy circles overhead. Arteries pounded. Sweaty fingers slipped on the nylon lanyard. Slowly the nest cradled in the lower bough. The hornet crawled out. We stared. My chest heaved. “The prize is worth the risk. It’s worth the risk…”

Struck with a fit of courage, I gently sunk the trimmer’s blade partway into the severed branch attached to the nest. We stared. I stepped back. The nest dangled at pole’s end. The hornet hung fast. Keeping the lanyard tight, nature’s bomb ticked inch-by-inch downward, until the prize rested safe on a tangle of sedge and canary grass. I released the lanyard, then stepped away, content to leave the gray cone until the day cooled.

Arms full, I clattered back to the CJ. The blue jays, cedar waxwing and turkey buzzard were gone. An eerie silence embraced the North-Forty. I don’t know why I left the pole trimmer in the grass; badly shaken, I suppose.

Curiosity drew me back. The sentry still stood guard. When I reached for the trimmer, two stiff gusts rocked the bough and nest. The surrounding cedars whispered what I took to be a gentle warning to leave well enough alone. The fourth gust, the lightest of all, dislodged the hornet. It hovered for a second, then, as if reconciling the futility of staying, it flew due north and disappeared in a cloud of drifting cattail fuzz.

An open trash bag gobbled up the prize with the severed bough. Tied tight and double knotted, the trash bag hangs from the pole barn’s cold ceiling. At winter’s end the paper-gray hornet’s nest from the North-Forty will take a place of honor in our rustic living room, suspended high against the wood-planked ceiling—alas, gathered not quite according to plan.

Venture into Nature, be safe and may God bless you.