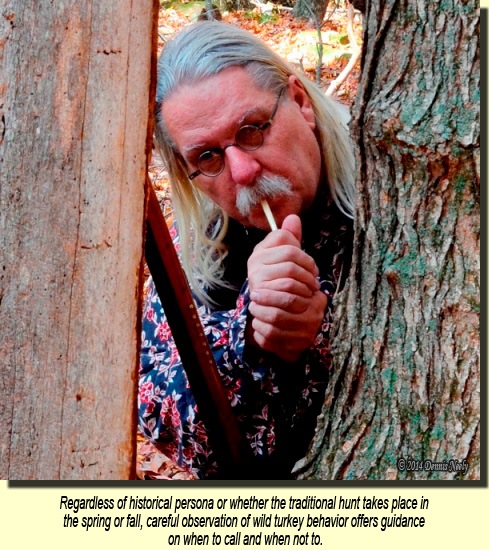 A wind gust whispered in the tight-packed cedar trees, behind, on the hill’s crest. A crimson cardinal flitted from twig to bough, then landed on a bare sandy patch surrounded by dried tufts of little blue stem. Another round of boisterous bantering overshadowed the subtle sounds of spring. Then sparrows chipped, crows cawed and unseen Canada geese ke-honked off to the west, out over the River Raisin’s flooded banks. Nary a hen spoke, only the tom turkeys.

Now and again, the pungent scent of rotting deer pellets, mixed with the ammonia bite of stale urine, perfumed the air. A single wing bone, creamy-white and polished from many forays, rolled back and forth between my thumb and forefinger. The Northwest gun, charged with an anxious swarm of death bees, lay across hunt-stained leather leggins, dampened with pre-dawn dew. Forty paces down the slope I supposed my hunting companion held the cedar box call in his lap with the same burning anticipation.

Agonizing minutes piled up. Spears of sunlight pierced the cedar trees; a bright horizontal line illuminated the tree tops on the far ridge. Then I heard a soft “putt” over my right shoulder. Ahead to the right, down by the hollow oak, a hushed “putt” answered. I squinted just as a bluish-gray head popped above the hill’s curve, thirty paces distant.

“Ark!” A crisp cluck came from the left of the broad-cedar lair. I fought the urge to turn as movement entered the left corner of my foggy field of view. “Old Lady Gray,” a smoky-gray wild hen with a notable anti-hunter attitude, charged uphill, paying no attention to the location of the box call’s last retort. Head up, beak straight forward, eyes slashing away at my humble fortress, the obstinate turkey marched intent on confronting her challenger or rooting out an imposter.

A bronze beauty, circling around a dark green hemlock bush, stepped into the right corner of my eye. The hen from over the hill appeared full-bodied in the tawny grass. The two birds looked at each other. Old Lady Gray stopped for an instant, not ten paces away, then changed course, looking beyond my humble existence. Her purple legs slowed their pace as if tiptoeing around quicksand. “Ark, ark!”

“Gob-obl-obl-obl-obl-obl!” I feared Old Lady Gray detected my surprised tensing, but she continued to stare at the two hens as if to ask “Which one of you dares challenge me!”

“Oobl-obl-obl-obl-obl!” The tom was closer than before. The moment of truth was at hand. With Old Lady Gray no more than seven trade gun lengths in front of me, I said a silent prayer. “Shower your blessings on Brad. A clean kill, or a clean miss. Your will, O Lord.”

On that warm April morning time’s threshold lurked somewhere between the cedar grove’s west edge and the tall, broad cedar tree, forty paces down the slope. I hid behind three scrawny cedars, secure in my 1790’s Eden, deep in the Old Northwest Territory; my son-in-law, outfitted head-to-toe in camouflage, sat with his back against that tree’s trunk, waiting for a fine gobbler in 21st-century southern Michigan.

We stalked through the cedar grove in the dark with that hill in mind. It was opening morning, and I whispered instructions as we walked. When Brad leaned back against that cedar tree, I pointed out land marks that formed the boundary for a safe shooting field.

Before I left, I reminded him to pay careful attention to my calling. If I responded to a gobbling tom, he was to remain silent so my seductive love songs would bring the longbeard uphill, affording him a close-in shot. I also said that if I thought it was safe, I might move to create the impression of a disinterested hen wandering off. “But if I answer a hen’s cluck note-for note,” I whispered, “try to duplicate my call as if we are two hens in a fight.”

The purpose of such a strategy is to challenge the dominant hen, as it happened that day, Old Lady Gray. When two callers sound like birds facing off in a territorial claim, the challenge is difficult for a dominant hen to ignore. This is the same behavioral force behind posting a jake decoy—it infuriates the dominant gobbler.

Sometimes the result is a futile,  long-winded, long-distance conversation, but other times, three or four stern-sounding expletives end with total silence—and that is when the dominant hen comes looking.

This calling technique is most effective when the hens and toms are settled into a mid-season routine: toms gobble back and forth, hens cluck a bit, the birds fly down, the toms head off to a favored strutting ground and the hens follow. But if a woodsman can coax the dominant hen away, no self-respecting gobbler will dance alone…

A number of 18th-century narratives address making bird and animal sounds. Joseph Doddridge’s explanation is the most often quoted:

“One important pastime of our boys was that of imitating the noise of every bird and beast in the woods…the imitations of the gobbling and other sounds of wild turkeys often brought those keen eyed and ever watchful tenants of the forest within the reach of the rifle…” (Doddridge, Joseph, Notes on the Settlement and Indian Wars…, McClain Printing Company, Parsons, WV, 1996, pg. 123)

Years ago the words “imitating the noise of every bird…” attracted my attention. The message many readers take away from Doddridge’s passage is: learn to duplicate bird and animal calls. But I believe there is an implied message hidden in his missive: it is not enough to be able to make the sounds, rather a woodsman must also duplicate them within their woodland context to his or her advantage.

A worthwhile skill that oftentimes results in rich rewards in the wilderness classroom is the power of observation. A couple years before, I watched a young smoky-gray hen walk down that same hill, stop and duplicate the call of a gravel-mouthed hen on the far hillside. She responded three times, note-for-note, then walked back into the cedar grove. 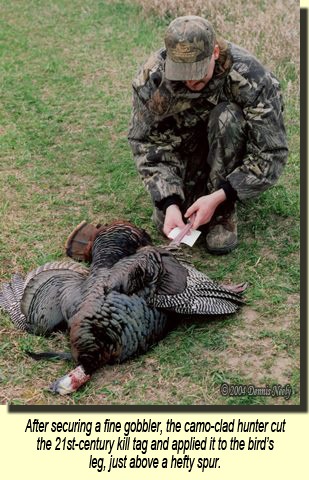 In about thirty minutes a large hen appeared on the very spot where the young smoky-gray called. She clucked twice, then marched into the clearing, not that far from the tall, broad red cedar…

Old Lady Gray paid little attention to her own safety. She continued to stare at the other hens, which now numbered four, as far as I could count through half-closed eyes. With a handful of cautious steps, she passed me. My arteries pulsed, marking the seconds as they usually do when the turtle sight holds on a fine longbeard’s red head.

At the shotgun’s blast Old Lady Gray lunged at the hens, then took wing. Whitish, downy feathers floated in the breeze. A tall, slender camouflaged figure scrambled to his feet and bolted down the hill. I started to get up, then eased back, understanding my presence would prove useless. Instead I said a silent prayer of thanksgiving, both for Brad’s good fortune and for being able to fool Old Lady Gray.