That question echoes throughout the black powder shooting sports, especially at every Michigan event. Roy “Pa” Keeler was one of those rare individuals who was comfortable with a multitude of roles, whatever the situation demanded, as long as it furthered muzzleloading.  He was an instructor, a historian, a salesman, a competitor, a safety officer, and above all, a friend. Today, The Spirit of Roy Keeler Society honors the soft-spoken, black powder ambassador revered and respected in all corners of the muzzleloading realm.

Born in Eaton Rapids on March 14, 1917, Roy Keeler’s early years were hard and demanding. With the Great Depression looming, he left school at the age of 10 to help his family survive. Roy was not the oldest, but his eight brothers depended on his leadership, understanding and ingenuity, and that is how he came by the name “Pa.” Keeler spent his entire life in Eaton Rapids with his wife, Thelma, who he affectionately called “Ma.”

A millwright by trade, Roy worked for Fisher Body for 32 years. In his spare time, he owned and operated Keeler’s Trading Post, next to his house. Although he sold new black powder components, gun-building supplies and accoutrements, Roy’s specialty was used muzzleloading parts. Pa would dump a bucket of lock parts on the countertop and rummage through the rusted heap right along with his customer. In the midst of the search he might hold up a hammer, mainspring or frizzen and explain what rare firearm the treasure belonged to.

In 1995, Pa Keeler was the first inductee into the NMLRA’s Black Powder Hall of Fame. He passed away at the age of 80 on February 5, 1998. Shortly after his death, the MSMLA established The Spirit of Roy Keeler Society.

At first the yearly inductees were voted on by the MSMLA board of directors, but from the outset, the intention was for the society to be self governing. Inductees are chosen by the current society members from at-large nominations submitted by MSMLA members.

“Each year a Michigan resident that has displayed the values that Roy Keeler lived by will be selected to enter into this society,” the MSMLA nomination ballot states. “Friendship, sportsmanship and promoting the black powder shooting sports in the state of Michigan are primary factors in the selection.”

“To those of us that were privileged enough to have known him there is the responsibility of keeping his spirit alive. In doing this we may pass on to others what we received from Roy and to impart, in some small measure, what it truly means to be a friend” (The Spirit of Roy Keeler Society, MSMLA, 2008, pg. 3).

“One of everybody’s concerns,” Wayne Lamson, the 2005 inductee, said, “is that over time people will forget who Roy was and the values he stood for. There’re more and more people who didn’t know him.” 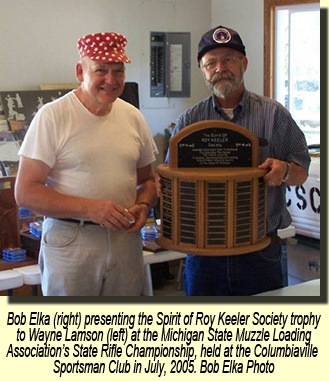 “It’s quite an honor,” Bob Elka said. “One of the problems is getting across to people that this is not a popularity contest. The society honors people who have promoted black powder over the years and have been heavily involved in the state association and the national [association] at Friendship. It encompasses a very broad contribution. It’s extremely difficult to pick the very best person each year.” Elka was inducted in 2001.

“And ya gotta give Wayne and Joe Valentin [2007] credit,” Elka said. “They did the original ground work to get the society going, and it was tough. Wayne made the trophy and in the back of the trophy is a book with all the pictures and history of the society.”

When asked what it means to belong to The Spirit of Roy Keeler Society, Lamson said: “Let me answer that in a different way. This last year [2009] Scott Langworthy was selected. He said, ‘There are so many other people who are worthy in so many ways. I’m not worthy of this honor.’ I told him that none of us listed on that trophy are worthy. It’s beyond my ability to express the meaning of it.”

Perhaps Keeler’s greatest legacy is the example he set by sharing his knowledge and love for the old-style guns with anyone who asked. In the black powder shooting sports competitors are quick to offer a helping hand, lend a prized muzzleloader to a stranger or bestow a lifetime’s accumulation of shooting secrets so another competitor can perform to their best potential. This willingness to share is a hallmark of the sport, a hallmark directly attributable to Pa Keeler’s values and example.

And when the question arises, “Did you ever meet Pa Keeler?” it usually precedes a valuable lesson learned from the old master’s tutelage, a lesson about to be passed on to the next generation of shooters.

“The man was a walking encyclopedia,” Elka said. “If I live to be 100, I’ll never know half what he knew. He stated an answer, if it was factual, and if it was his opinion, he’d tell ya it was his opinion. He didn’t embellish things, Pa wasn’t that way.

“Pa was a flintlock man, no two ways about that. When the muzzleloading [deer] season was brought up, it was supposed to be flintlocks only. But he knew if it was going to happen it had to include the percussion guns. If you read some of his old articles in ‘Pa’s Powder Horn,’ the man was gracious enough not to say anything bad about the percussion muzzleloaders or the inlines.

“He was always encouraging people to get involved. He always would take time, especially with young people or new shooters, and if he was busy, he’d say ‘If ya got a moment, I’ll get to ya.’ He had a magic ability to make you feel warm and welcome. No one can fill his shoes,” Elka said. 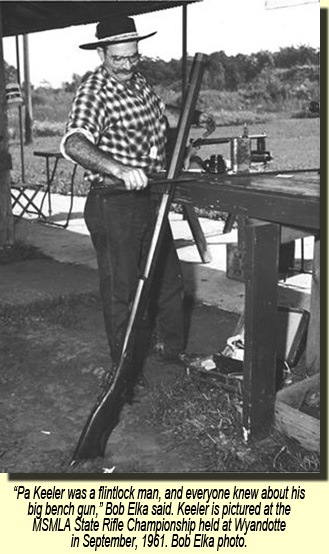 “Pa was a person I enjoyed being around,” Lamson said. “He wasn’t real serious about the shooting as much as carrying on a conversation with everybody around him. He was there burnin’ black powder like everyone else, but that came second. If he shot a good target he was happy, and if he shot a bad target he just hung another target and kept right on going.

“My fondest memory, well, there was a guy, a fierce competitor, down the line. He thought every target had to be good. He was having a bad day, and he got to throwing stuff around. We watched him; he was putting on quite a show. Well, he shot a good target and all of a sudden he went from someone you didn’t want to be around to everyone’s friend.

“Roy smiled and said, ‘There’s nothing like shooting a good target to improve a person’s disposition.’ I’ve never forgotten that. He didn’t have anything bad to say about the guy, but when he said that I broke out laughing, because Roy said it all, he summed up the whole situation.”

At Pa Keeler’s funeral, Lamson observed: “Roy was the right person, in the right place at the right time for all of us. The possessor of the rarest of human qualities, this was a person that could tell anyone exactly what he thought, even on the most controversial topic, and everyone would part friends…With the passing of Pa it is not just that we have lost a friend, the world has lost a prime example of what a friend should be.”