Shrill screams hung ominous in the breeze. A red-tailed hawk lurked nearby and made its presence known. Two chatty song sparrows, caught in the open, perched opposite each other on drying mullein stems. Both hushed, looked side to side, then up and down. The closest sparrow, perhaps a dozen paces distant, winged to the safety of a red cedar tree heavy with bluish-gray berries. A magenta-tipped bough bobbed twice, then came to rest. That sparrow remained silent, motionless. The other flew across the man-made clearing and disappeared in the oaks. The hawk soared west, high up, beyond the wooded ridge. 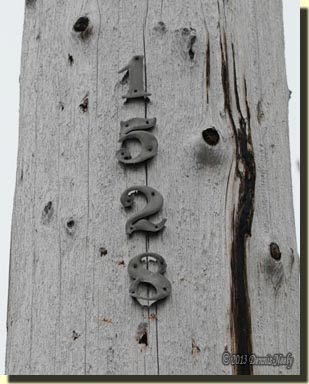 An unpleasant scar marks the North-Forty; a 46,000-volt power transmission line bisects the property on a slight diagonal, north to south. The clear-cut right-of-way leaves little doubt of man’s commanding presence. Built in 1954, the poles have weathered to a grayish, buff tan color. Tarnished metal numbers, dangling on loose nails, identify each pole. I walked around the first of several small washes left in the wake of planting pole No. 1528.

Down the hill, a fox squirrel bounded in wind-piled leaves at the right of way’s cut edge. The furry creature dug beneath a young red oak with a faded blue “X” spray-painted on its trunk. An unrelenting chainsaw missed that one in the spring. The plump squirrel backed up, sat with its fluffy tail curled over its back and rolled an acorn over and over between its paws. As it munched, its attention centered on the pole’s top, ignoring me. From time to time red-tailed hawks sit atop the poles, watching, waiting, hungry…

On that pleasant October evening, I gave no thought to the right of way or the power poles—they’ve always been there, at least for most of my lifetime. After a hard day at work, I lacked the energy to trudge to the River Raisin; I chose instead an hour’s worth of respite somewhere around the spring-fed pond. The location didn’t matter, getting outdoors did.

A bit uphill from the reprieved oak I wandered into the hardwood stand, avoided the prickly barberry bushes and paused two oaks in from the big swamp. The air smelled of drying leaves and the sweetness of fresh shelled corn. An old Rose of Sharon humped up in the sedge grass. A crimson cardinal clutched one of the bush’s upper loops. Like the fox squirrel, it paid no attention to me, only pole No. 1528. Not wishing to disturb this forest tenant, I watched and waited. It flew. I moved on.

Elk moccasins hugged the swamp’s edge and proceeded into a finger of red cedar trees. Canary grass grew thick in the lower branches of the last few scruffy cedars. Another pause; eyes only walked the doe trail that led from the finger to the swamp’s far bank. The black ribbon appeared mucky, but not wet. I got it in my head to spend the rest of the evening concealed under the branches of the broad cedar that grew a few feet up the hill on the west bank.

Moccasins paused. The spirit enjoyed. Feathery clouds turned orange and lavender. Sunset was upon me, and I had yet to cross the swamp. I didn’t care. The frolicking chickadees scrubbed away the day’s trials and tribulations. A cleansing peace settled upon a weary visitor.

“Scureeeee…scrueeeee.” A red-tailed hawk, the one from earlier no doubt, circled overhead. The chickadees hushed as the song sparrows had; three, maybe four songsters looked up. Two took flight; in a few heartbeats the rest followed, wings buzzing, bound for the white oak island, named for the solitary tree that spreads its limbs out over the tiny earthen bump. Short, stunted cedar trees mixed with autumn olive bushes fill the spaces beneath its branches, affording the chickadees safe refuge.

After glancing about, I progressed but six steps before glimpsing a black hoof in the shadows behind the gray, dead twigs at the base of the cedars on the opposite bank. Caught in the open like the chickadees, I dropped to one knee and sought concealment within the tawny sea of canary and sedge grasses.

In time, a doe and her two fawns browsed down the slope. The fawns romped on either side of their dam. Their spots were barely visible, vanishing beneath winter’s thicker, darker hairs. The young whitetails joined their mother just short of the swamp’s cut bank. I settled lower, eased back and sat on a rounded, sedge grass root-clod. A telltale whiff of wild mint tickled my nose. The muck damped my fingertips.

Minutes later, another doe with a single fawn wandered in from the north.  As I watched, crows cawed in a frenzy, off to the east, behind me. Two or three mourning doves streaked by searching for a night roosting spot in the thickest cedar boughs. I never saw, nor heard the hawk until it passed over top of me.

Wings pulled half in, almost closed, the diving red-tail’s tail feathers, spread broad, ever adjusting, guided the descent. The unexpected brown and ivory and red swoosh kicked the air from my lungs. Heart racing, my head jerked up. Talons flashed. Legs stretched. Wings cupped, then raised high to dump air. With its primaries spread wide like ghoulish fingers, the huge wings flapped twice before disappearing into the canary grass with an audible thump and an eerie cry: “Scureeeeeeeeeee.”

Veiled by a grassy curtain, wings flailed and thrashed. Torn bits of grass and a downy feather or two drifted in the evening breeze. The young whitetails’ heads were up, ears forward and alert; the two mothers browsed. Enthralled, the fawns and I watched the age-old drama unfold. I heard two muffled, squeaky whimpers; I questioned whether it was the hunter or the prey, then a foreboding, unnerving silence. Arteries throbbed. Seconds pounded by, ushering in the inevitable final act.

Cooper’s hawks and red-tails often hunt atop pole No. 1528, more so than the other poles. When the red-tail first flew east, I didn’t think much of it. With the sun setting, I assumed it would continue searching for an evening morsel from the sky; I never considered it might sit on that pole, much less power-dive over top of me.

Perched atop pole No. 1528, the raptor saw the interloper skulk on the mucky trail. It knew of the chickadees. It spied the deer. It observed the intruder drop down into the sanctity of the canary grass. It understood the human posed little danger. It saw movement in the grass. Perhaps hunger overcame woodland caution and outweighed the risk?

A passel of minutes ticked away. The deer stayed on the bank, and I didn’t dare move, either. Daylight faded, and then the grass exploded once again. Outstretched primaries pumped, reddish tail feathers fanned wide and yellow talons gripped the forest fatality. The hawk rose straight up. A young rabbit’s limp, lifeless, furred feet dangled. I remember sitting in awe of the hunter, but I could not help but focus on the hunted. The hawk struggled to gain the treetops, then, as if satisfied with its altitude, it veered east. I thought it might try to perch on pole No. 1528, but that was not the case.

Make time to wander outdoors, be safe and may God bless you.