Calm, contented muscles resisted. One foot, then the other slipped over the bed’s edge. The chilly wood floor left little doubt; getting up was not a first choice. The threads of life tangle, bind and burden one’s soul, or so it seems. Linen and wool layered; I dressed in haste.

Through the back door, around the corner of the house and across the slick asphalt my wool-lined winter moccasins skittered. Sixteen the thermometer on the back deck had read. Frail icy flakes floated, hesitated and drifted in that February morning’s crisp calm. Yet, like waves of mystic warriors they slashed, hacked and cleaved life’s spidery webs. The air smelled clean, fresh, but still wintery. By the end of the lane, I was giddy, enthralled, and a tad overwhelmed. 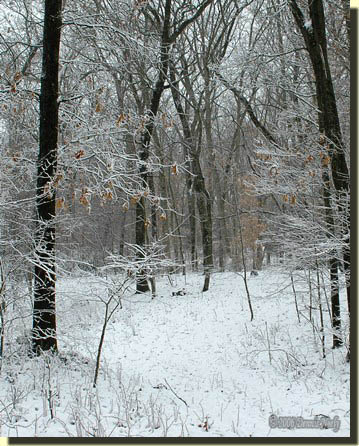 “Cheeri-leee, cheeri-leee.” Standing knee-deep in fluff, an early robin watched me kneel and inspect the grayish dots, painted by a coyote on the dull-white canvas, minutes before first light. The round, precise strokes looped around thick tufts of dead brome grass and through a cluster of shoulder-high red cedar trees, vanishing over a gully’s edge. Curiosity tugged. The left moccasin slipped. I slid down the gully’s steep bank on my rump, not by choice. Snow tingled on a bare wrist.

As I brushed off, a crimson cardinal “whit-tsu-ed” atop the broken box elder at the head of the ravine. The coyote’s tracks curled around two clumps of autumn olive. I hunched over in pursuit. At the mouth of the gully, the dotted string faded as it crossed the hayfield. I did not pursue, but sat against a shagbark hickory instead.

Umber-colored deer wandered into the hayfield; their morning rest beckoned. Some looked about; others walked on. Ears flipped and listened. Broad, long-haired, white tails twitched, but not to signal alarm. Using a shiny-black hind hoof, an older doe itched her neck. The snow flurries ended.

To my left, five chickadees flitted in a bare autumn olive. Tiny white snowstorms erupted as they bounced from branch to branch. “Chic-a-dee, dee, dee, dee,” a chubby songster teased. Three does and six yearlings passed, but the flitting circus was more fun to watch.

A loud, emphatic commotion demanded attention. Trail-worn moccasins trudged uphill, in the opposite direction. Huffing, I reached a vantage point. To the east, across the hayfield, beyond the box elders and cherry saplings that hid the nameless creek, the three sandhill cranes trumpeted their discontent.

At the bottom of the knoll, two dark shapes plodded through the reddish-gray veil of box elder and cherry twigs. The coyote stared at the sandhills, then glanced at the newcomers. A neighbor’s Angus heifers entered the fray, advancing with a cautious, labored shuffle: first the right heifer, then the left, then the right.

With reinforcements at hand, the sandhills took a daring, almost unison, pace forward. They lowered their long, slender beaks and taunted the assailant. Minutes pulsed by. A lunge seemed imminent; I thought to myself, “coyote or cranes?”

In the midst of the harangue, a handful of paces to my right, a male cardinal clenched a sprig. His beak opened; his head tipped up; and his throat feathers rippled, but I heard nothing of the troubadour’s song, only the constant roar of upset cranes. Uncounted minutes passed.

The coyote half stood. The sandhills resumed an upright, necks-high-and-heads-stern posture. One by one, the birds opened and cupped their wings. The instant the coyote settled back down in the snow the cranes initiated the charge. The surprised beast scrambled to its feet, ducked its head down, then spun in a full circle. I could almost hear the snarl.

Before the next spindly leg hit the snow, the heifers’ heads jerked toward their allies. The birds advanced. The Angus yearlings pushed off in their own clumsy, slow motion attack. The coyote cowered, then bolted. A heifer bellowed, emitting a wispy white vapor cloud. The sandhills’ screams ceased.

The coyote glared over its shoulder twice, once at the sandhills and once at the heifers. On the knoll top, it broke into the bouncy lope coyotes assume when they plan to cover a great distance. On my feet, leaning forward and breathless, I scribbled in earnest.

Yes, getting up was a chore. The reluctant snowflakes, the chilly robin, the brilliant cardinals, the unconcerned whitetails and the chickadee circus were blessings enough to cleanse life’s tribulations. But to witness an unbelievable outdoor drama was a precious treasure, a gift that can only be shared, never relived.

At the dip in the lane, my heart raced as I wondered what nuggets I’d squandered on other mornings, those when my eyelids sagged and I failed to venture into Nature. I paused, then turned about in quiet contemplation. In the distance, I heard the cranes’ contented chortle. Back in the ravine, a cardinal “whit-sued” from the grape vines, and perched high in a nearby maple, a plump robin “cheeri-lied.” Their messages were quite clear; I’ve been invited back…

Venture into Nature, be safe and may God bless you.